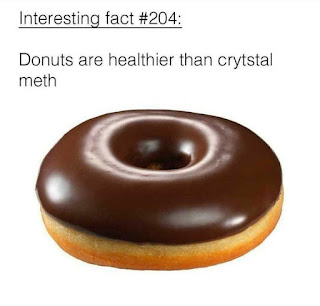 I thought I would leave this as the final thought as this month wraps up.

Emergency medicine comes down to this... the lesser of two evils, or as I like to always say, there needs to be balance and symmetry in all things.

About 75% of everything I see in the emergency department comes down to poor choices, poor habits, or poor coping skills. I see the devastating toll that substance abuse takes on bodies, on families, on the community.  I've seen every possible complication that meth can produce on the human body; from simple delirium to full blown psychosis, from a simple lesion to a person literally digging the skin off their neck because they are convinced there are "worms crawling in there," from skin infections to full blown sepsis requiring ICU admissions... people have had heart attacks, strokes, miscarriages, and temperatures so high they've essentially "fried" their brains and died... meth mouth is a real thing... tweakers are real... and zombies do roam our streets wearing tattered clothing with vacant stares mumbling incomprehensible words... I've seen teens on meth as well as 70 year olds on meth... and I've told my students time and time again, "Meth be bad, m'kay..."

So the next time you're tempted to "meth around" drive to your local donut shop and have a chocolate glazed instead.... I'll help you with your diabetes later...