I can't believe how much time has passed since the last time I posted... Let's get you caught up on "life on the farm" shall we...? 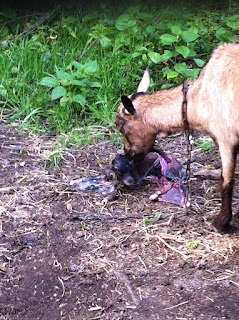 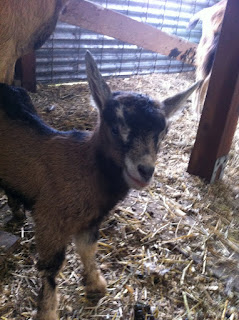 Why, yes, this is a baby goat... Her name is Boot Scootin' Boogie aka Bootsie. She is a bit of a surprise. When we got our goats about a month ago, the breeder said that Josie was sterile. That she'd been with a male goat for a while and hadn't gotten pregnant. So, last week Monday after the goats were put in for the night, I told my DH that something was wrong with Josie. She kept calling out from the barn and seemed very restless. He argued that she was just being annoying as always, and we went to bed. The next morning while I was in the shower, DH went out to let out the goats and chickens for the day. He came back in and said, "Something's wrong with Josie." I asked what, and he said he didn't know but that "something's falling out of her behind." I quickly got dressed and ran outside. And, that's how Bootsie came into the world. It's been an amazing week of watching this tiny little shaky blob slowly find her legs.  She now scampers around the yard with her Momma. 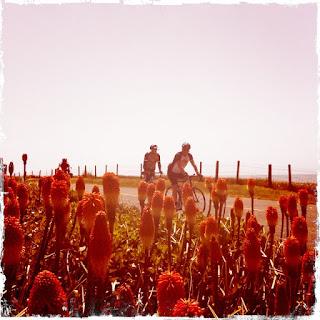 I did medical control for the Tour of the Unknown Coast bike ride again. It's a fabulous 100 mile bike ride along the coastline here going from redwood forests to the coast and then up an impossibly steep series of hills before the scary downhill run home. No major traumas, just some dog bites that had to be attended to.

Dixie is a week away from being 6 months' old. It's been awesome seeing her grow up and develop. She went through an impertinent teenage stage which she is slowly getting over, and she's really turning into a wonderful dog. 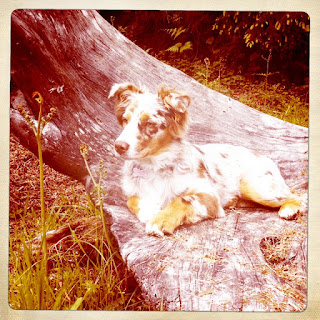 As for our "mutant chickens" that I wrote about in the last post... well, 3 have disappeared. One for sure died, as we found it near the barn. The other two, we're not sure, but I hope there isn't another wild cat around. We have seen foxes around, so maybe they got eaten by one of those. Nonetheless, DH thinks we should stick with bigger breed chickens. They seem to do better.  In fact, tomorrow I'm supposed to get 2 more large hens and a new rooster.

Work continues about the same, and I know we're starting to head into the trauma season, so it's going to get even more busy. I was chosen as an instructor for a new program on patient safety so that has kept me busy with training and meetings. I also am the new pre-hospital care medical director, so that is going to take up a little more of my time.

With new babies, a new puppy coming soon, and living in this wonderful place, I know I am going to have to get a better handle on my time... I don't want to miss anything...
at May 22, 2012 2 comments:

There But For the Grace of God

While I was visiting my mother, a bobcat decided to visit our property and made off with two of our chickens.  I was kind of sad because I'd grown attached to Mr. Waddles the rooster and our little hens, of which now I just had one left.  My husband and I discussed getting new chickens, and I called the original breeder where I'd gotten the chickens from last September.

He said he didn't have any chickens, but he knew of someone who might be selling theirs.  He had told me about this "someone" almost around the same time I originally got my chickens, but at that time I didn't want two roosters around.  This time, though, we said "sure" to a small flock of 6 chickens.  They were collected up and brought to our house about a week ago.  We're not quite sure yet what to make of them.

I call them the "mutant" chickens.  They belonged to an elderly gentleman who was no longer able to care for them, and they look like they haven't been taken care of for a while.  Some are missing feathers, one is missing an eye, and the rooster sounds like he's got a bad case of emphysema.  Our one sole bantam hen from the original group won't go near them.  Five hens and they haven't laid one egg.

For some reason this got me to thinking about life and the different paths that we all follow.  Both sets of chickens came from the same breeder.  Our chickens got to come to our home, the Beverly Hills of chicken life;  acreage, plenty of food, a large coop, etc.  The other chickens went to, well, let's be honest, a trailer park.  They had small living quarters, a small yard, and I am not sure how often they were given chicken feed since they don't seem to know what to do with it when we throw it to them here.

My own life could have gone in so many different directions.  Any small change of circumstances and I would be in a completely different place than where I am now.  I thought about that today when I had a patient come into the emergency department crying hysterically and hyperventilating.  She's now homeless as a result of finally getting out of her abusive relationship.  She was trying to make something of herself;  getting a medical assistant's certification.  She's had problems with alcohol abuse in the past, but kept herself clean enough to make it through her program.

Tonight she'd had enough of the emotional abuse from her significant other and had packed all her belongings and was trying to leave.  A verbal then physical altercation led to her ending up in the E.D.  She cried as she wondered where she was going to go next.  No family, no money, seemingly without any support at all, and she's my age.

I tried to reassure her that things would get better.  We called the sheriff who documented her wounds, took her statement, gave her information on local resources.  We gave her a phone, she called her son, arranged for a ride, and we discharged her to home... well, to wherever she was going next.  Hopefully not back to her significant other.  Hopefully, her circumstances will change for the better, too.