And, In Our Last Episode... 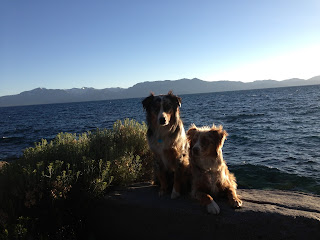 Where has the time gone...?
That's one of the things I like/love/hate about the blogging challenges...
they keep me writing daily so it becomes a necessary part of the day.

Just like my exercise program, I get lazy, fall off the wagon,
and BAM!  no more postings for over 4 weeks
and sneaking hamburgers when I'm supposed to be eating salads...

Let's catch you up on life...
This month's travel took Momma, the husby and me, plus the dogs (as always)
to Lake Tahoe... 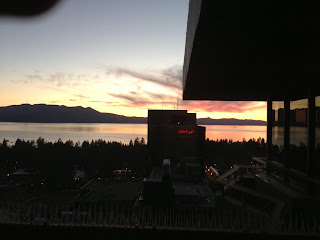 I actually won a small jackpot ($250) on the first night,
and Momma exacted her revenge by winning the remainder of the time.
She is the Slot Machine Queen after all and wanted to make sure she kept us in our place.

The rest of the time, I've been putting that extra money
I've been earning in Sacramento to good use...
We're finally doing some more remodeling of the house.
Here's a before and current... 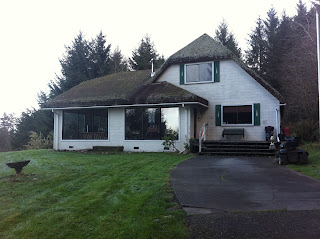 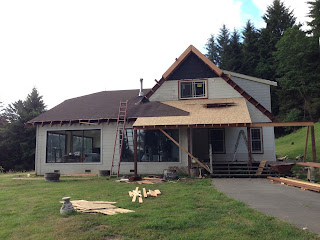 As you can see, the face of the house is completely changing
and many trees in the back have been cut to allow more
sunshine into the back yard.

Those big sliding-glass-door window in the front will be changed out,
and there's going to be a side arbor to the porch. 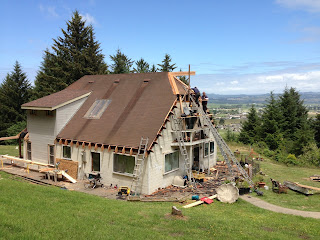 For some reason, this picture reminds me of those NYC skyscraper
shots from the 30's... yeah, I think it's kind of majestic like that in a way...

In other news, the flock count has changed again.
We started off with 6 turkey chicks.
One died the next day, and two developed splay leg (spraddle).
One had to be put down after about a week because it started to develop sores,
the other was put down after about 6 weeks because it was outgrowing the
different splints I was applying to see about correcting the problem.
So now, there's three "turklets" one male and two females...
Here's the male showing off for the first time... 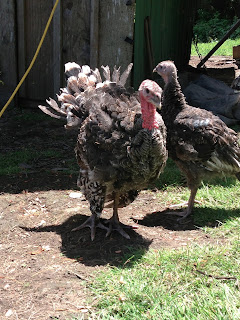 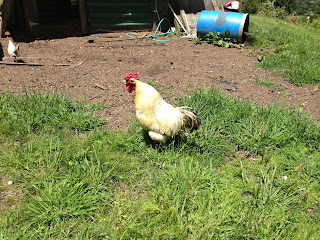 since it seemed Benny didn't know what he was supposed to do around the hens...

But then, about 2 days later, Hawkeye, who had disappeared a couple of weeks back,
reappeared with two in tow... 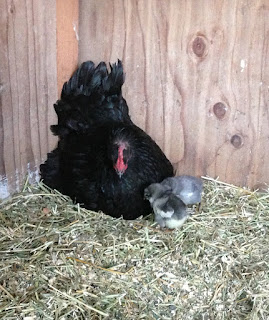 So maybe Benny was doing something right after all...
He's in a new home, with a new flock,
but his memory will live on here.

We also had to put down one of the original chickens who
seemed to start going blind and started losing weight.
Her sister has disappeared, and if the bobcats haven't gotten her
Benny may live on in yet another generation of chicks...!

What else has happened...?
One of the goats developed a Listeria infection that caused her
neurological problems, like spinning around continuously
because it affected her nervous system.
So it was every 6 hour high dose penicillin shots,
along with B vitamins,
and a lot of anxiety given what I went through with Boots.
Luckily, through a lot of dedication, Shirley pulled through.

I think that's about it for this time.  July is just around the bend,
and I will do my traditional iPod Birthday Month Shuffle,
so I will be posting more...!

Thank you for visiting along...!