It's always sad to lose a friendship, and worse when it's over something stupid like a man.

I went to college in San Diego, and I had a close circle of friends;  in particular, two friends that I had made while living in the residence halls.  In my senior year, we ended up living together.

Now, over the prior four years, we'd had our share of relationships  Of ups and downs, of late nights crying and hugging, of burning photos and drinking wine coolers (yes, this was the 80's), and of promising that no matter what, we'd always be there for each other.  Until "Malone" (alias) came along. 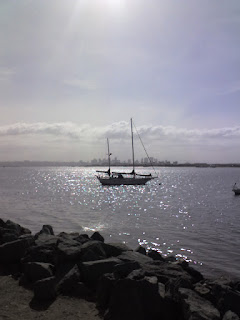 I can't remember how they met.  We were all over 21 at this point and going to bars and clubs on the weekend was a usual occurrence.  We had a wider circle of friends, and it wasn't unusual to be headed to a frat party followed by a party at a friend's house stopping off at a bar for last call.  And, that was just Friday night.  Oh, my liver.
Anyway.  They met and soon weekends were spent going to places where Malone would meet us later.  Then, she started going out alone with him and maybe meeting us later.  Soon, the mid-week booty calls.  Always at his beck and call.

Paula Abdul's "Cold Hearted" came out in June of 1989, and the lyrics fit the situation perfectly.  At least that's how I felt, and how I voiced my concerns to my friend.  Our other friend said "the song wasn't being fair to snakes."  Regardless, I committed the girl friend sin of not supporting my friend in her new relationship.  As she got in deeper and deeper with Malone, our relationship suffered until we no longer had a friendship.  We stopped doing things together.  She stopped talking to me.

This was difficult given that we were living together at the time, but I was just a few months from graduating involved in finals and resumes and job hunting, and she was spending more time with Malone whenever he was available to her.  Our other friend kept neutral and maintained her friendship with both us.  She tried to advise me to support our friend, but I insisted that she was in an unhealthy relationship that was only going to end bad for her.  I explained that I would be there for her when it did, but until that point, I didn't want to see her continuously subjecting herself to Malone's whims and demands.

Years later when I hear this song, I think about that friendship.  I wonder if my 20-something year old self could have handled it better.  I know that around the time I graduated, she stopped seeing Malone.  Through our mutual friend, I know years later she eventually ended up on the East Coast, married, and had kids.  A part of me wishes I could have continued to be her friend.  Have you ever found yourself in a similar situation?  How did you handle it?