P is for Peppy 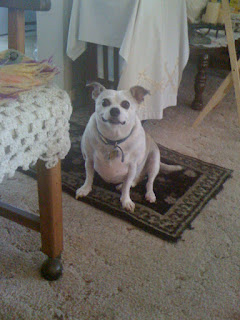 My mom's last dog was Peppy.
He died about a year ago.

When her previous dog, Sheba, died,
I had imagined getting her something small and fluffy.
Then her co-worker brought Peppy for her.

He was a stray that had been picked up by her law enforcement son
because some homeless had been kicking at the puppy.
Momma's co-worker said that when her son went to get the dog
all he did was growl, but he was able to get him in the car.
She knew that Momma had just lost her dog and thought
that Peppy would be a good match.

I don't know why.
I remember when she brought him home from work.
Fifteen pounds of pure mutt, maybe chihuahua, maybe bull dog,
may be a lot of things.

He was rebellious;  had been used to living on the streets.
And he had a TON of energy,
hence the name, "Peppy."

He peed all over the floor,
he growled if you wouldn't let him do something,
he thought he was the $&!*.

I told Momma he should go to the pound,
but she said "everyone deserves a chance."
So she worked with him, got him housebroken,
and he was her constant companion.

Later when I moved to NorCal, she would bring Peppy along.
He didn't chase the cats, he didn't fuss with the chickens,
and my dogs put up with him. 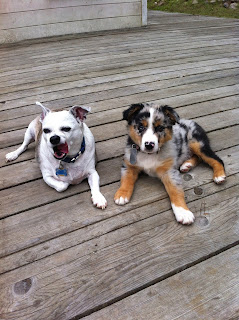 He traveled well, and took everything in stride.
Momma did a good job rehabilitating him.
Just as she did everything else,
with a lot of patience and love.

Peppy lived a full and happy life,
and he is waiting for her across the Rainbow Bridge.

And, I know she misses him daily.
Although Dillon is working hard to make himself
the top dog in her life... 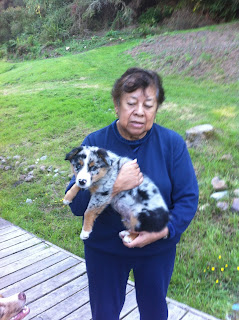 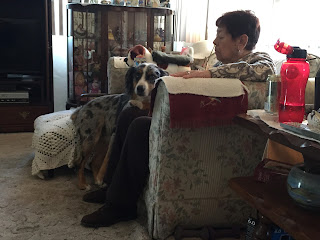 First time visitor here. Just popped in from AtoZ Challenge.
Been looking at the earlier posts, and I love these life-excerpts of your life with your mom. She's quite a lady! Any time I'm at a loss as to what to do, I think "What would Mom have done/said?" She was usually right.