J is for Jaded 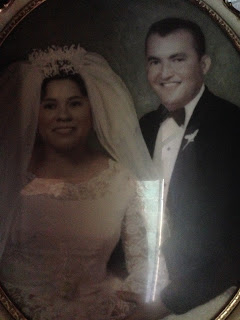 For as long as I can remember, my mother always told me that
"men are selfish"
"men only want one thing"
"you can't trust men"
and many other statements to that effect.

I always thought it was so I wouldn't end up 15 and pregnant.
But, then I learned more of her story as I got older.

You see, my mother didn't marry until she was late in her 20's.
Her father died when she was about to graduate from high school,
so she put aside her dreams of college to go to work and
support two younger brothers and a sister.

She saw her two younger brothers start college
and younger sister finish high school.
At some point she met my father, and in
August of 1966, she got married.

This is their wedding photo.
I've only seen it about 5 times in all my life
because she's kept it hidden in her things,
and very rarely does it come out.
I snagged a photo in December of last year.

Anyway, I was born in July of 1967 and
by somewhere in August of 1968 she was divorced.
She often told me that my father expected her to work,
but also to take care of him.
Then he brought his brother to live with them and
by her report, he did nothing but lay around the house.
Supposedly my father drank and went out with his friends,
and my mother was left to "clean up the mess."
So she kicked him, and his brother, out.
Unbeknownst to him, she had him sign a post-nup so
she kept the house which she had bought
and full custody of me.

I later heard rumors that he was actually married
with another family living in Mexico, but I still
don't really know that whole part of the story.
I just recently learned how she met him,
but I'm saving that for another blog post.

She never remarried.
According to my grandmother, lots of family friends
pursued my mom, even with me in tow,
but she said no to all of them.

I've never asked her why...
but, I guessed from her attitude toward men
that she shared with me
she just couldn't trust anyone else ever again.