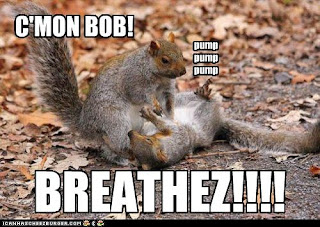 Let me give you an example of what constitutes an emergency...

There's a patient that comes into the ED often,
usually after trying to act like a tough guy
and coming out on the losing end of a pair of fists.
Alcohol is also usually involved.

Mr. Tough Guy messed with the wrong
pair of fists and received several stab wounds
as a reminder that there's some people
you shouldn't mess with no matter how drunk you are.

He got the "homey drop-off" at the entrance
to the lobby of the ED.
As he staggered across the room leaving a trail of red
that quickly caught the attention of the triage nurse,
she rushed out and met him
escorting him straight back to the trauma room.

Her first impulse was to call out to the passel of people
waiting to be seen for their coughs, sore throats, or
knee pains that had been going on for the last 4 years
and say, "Now, THIS, is an emergency...!"

And the kind of patient that makes up for all the others that show
up on any given day....

Having worked as a wound care/burn consultant to the ED as well as psych crisis, I am enjoying your blog. Its a reminicent read. I am currently in a docile private practice and taking deep breaths again.

It must be frustrating to have the ordinary aches and pains and ailments show up in the ED. Love the posts about the farm!