In Spanish, "Duerme" is "you sleep" or "go to sleep."  Most Mexican kids know "go meemees" which is equivalent to "go sleepies" or whatever you tell your kids when it's time for bed.  My friends all know what "go meemees" means" as do, surprisingly, my dogs.  It's one of the first things you remember growing up... it's time to "go meemees..."  Well, that and "chonies."


This song is a kind of lullaby.  The singer is telling the young child that their mother has gone off to work and when she comes back she's going to bring candies and gifts and food.  So sleep now, and she'll be home soon.

About the time I entered my teens, my mother started traveling for work.  Although she was away from home during the week, she'd come home late on Friday nights and spend the weekend up until Sunday afternoons when she'd return to work in Calexico, CA.  I know she did it to earn the extra money she was paid so that I could go to private school and then to a private all-girls high school.

And, sometimes she would bring little gifts and treats that she would pick up.  Just a little something to let me know she was thinking of me during her trip.  I still remember a small purse that was like a mini Mexican mercado "shopping" bag.  It was perfect for me because I really didn't like (and still don't) purses.  Maybe that's why I now have a fascination with totes.  Hey, we were into being environmentalists before it became fashionable... and this little tote was just that... 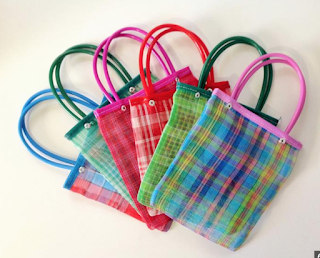 Is it weird I haven't started going through my mom's things yet?  I was emptying out the bag I took to the funeral, and I found several things I had brought back from her house in SoCal... small things that I had brought for her during my trips... just to let her know I had been thinking about her... full circle.

Those are cute little totes. No its not weird that you haven't gone through her stuff yet. If you don't have any time limits (i.e. selling a house, that type of thing) then don't rush it. You'll know when you are ready. We call it "time to go nighty night." The dog understood it too :)