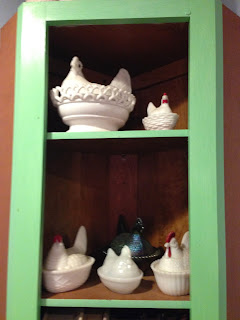 There's something I find fascinating about that television show
"Hoarders" because for the most part I've always thought
there but for the Grace of God go I...

You see, I can totally relate when the person they're interviewing
talks about how they can't get rid of that one clothespin because
it was the last one from a set that their mom/grandmom/aunt/special friend
used to have and the memory of them is tied up in that one inanimate object.

I have boxes of things that I don't know what to do with.
They're silly things, and I know I should get rid of them,
but somehow I can't.
I think back to when I bought them,
or acquired them,
or were given them,
and I know I can't just throw them away
or give them away.

It really does stress me out.

Some things I know I have to let go.
I stop and wonder if I died today and someone
was going through my things,
would it really matter?

But, I'm still alive, and it does.

Now, don't get me wrong.
I'm not like "house of stuff so you can't even walk through it" bad,
but, there but for the Grace of God...

I also wonder about objects that I pick up at vintage stores
or at yard sales...
but, I'll leave that for another post...

I feel the same way. I have a hard time parting with stuff. I have started to do better over the years, though.