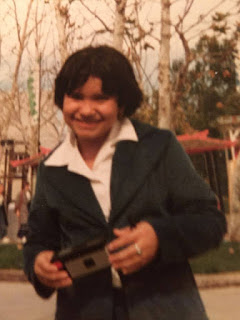 I don't know how much time people of my generation think about how the lives of current generations are so different from when we grew up.  Sure, there are all those memes on Facebook that show an item or two that only "Gen X's" can identify.  But, where you really notice the differences are when you look at old photos... or unpack boxes from your college years (mixed tape anyone..?  or better yet, what can I play that mixed tape on...?)

Take for example this photo that my bestie that was visiting this weekend sent me.  Look at that camera... I think this is a C24 camera that used to take film that came enclosed in its own container.  You popped the film in, advanced the film with a roller, then popped the film out and took it to be developed.  Some people might remember the 110 film cameras and rolls that were a much smaller version of this.

I had one of those too.

We didn't take a lot of pictures back then because film was pricey and developing the film also cost some money.  So our parents paid for it, and they weren't about to spend a lot of money on just a bunch of random pictures, so we had to make every photo count.  Not surprisingly, we didn't shoot a lot of pictures.

I still remember my high school trip to Europe in '85.  I took 10 rolls of film with me.  I would have loved to have taken more, but tried to factor in the cost of developing 360 photos on my measly allowance.  As a comparison, on my last cruise I shot over 2000 photos on three different devices including an SLR digital camera, a point-and-shoot digital camera and my iPhone.  I can promise you that about 30% of those shots are probably throw-aways and only about 40 or so would I ever consider printing.  Not to mention the video captured on the PNS and GoPro.

Kids today will have their entire lives documented and posted online.  I have photo albums.  Whatever happened to those...?  I guess I'll have to look into making a photobook online.  Much easier than trying to weed through several thousand images now on Facebook.

How do you capture your memories....?

I had a C24 and a 110 when I was a kid. I also had a nice 35mm. I still have the 35mm that my brother used when he was in Viet Nam in the early 70s. I use my phone now and a digital point and shoot sometimes, but I'd love to get another 35mm Pentax like the one I used when I worked for the newspaper. That thing took the best photos -- that is, as long I had all the settings right.