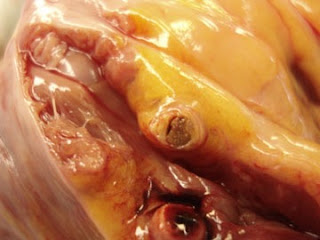 There was a time when I considered, for the briefest of moments, becoming a forensic pathologist.  I don't know why murder and mystery fascinates me as much as it does.  Those of you that have followed my blog for a time, especially while I was in residency, know that during my training I spent some time in the medical examiner's office in Erie County, New York.  But, before that, I did an elective in the medical examiner's office in Milwaukee during medical school.

I actually looked forward to coming in every morning and seeing what the day/night prior had brought in.  All the cases for the morning would be lined up.  Officers from various law enforcement offices would be there to see their case.  And the ME investigators would tell us the stories.  Then the chief medical examiner would divide up the cases, and the work would begin.

I remember one murder case vividly.  The victim was found in a field and taken to a local hospital where they were pronounced dead.  They came the next morning to the ME's office.  I observed the autopsy, and injuries consistent with being struck in the head were discovered.  The pathologist held onto the body, and over the next 3 mornings, we would pull the body out after morning cases had been performed.  Bruising became more evident as time passed, and there was a small lesion I noted on the last day that was photographed and helped to solidify the case against the perpetrator who had apparently chosen the victim at random.

That was such a surprise given all of the leads which were followed up on.  The list of suspects that the victim had known and which were eliminated as suspects.  The review of store footage which helped to establish a timeline for the victim.  And, finally, a couple of weeks later, an anonymous call which led to the perpetrator.  At least, justice was served, and it's a case I'll never forget.

I remember following the path of bullet holes through various layers of clothing in another murder victim.  I remember the victim of a house fire that had to sit in the corner of the autopsy suite "defrosting" for several days.  I remember the tiny murder victim whose organs were so perfect, I wanted to cry.  I remember the disinterred case that was brought back up for analysis in case something was missed on the first autopsy.  And, I remember the suicide case that killed themselves because of having a financial crisis, but who missed the letter that came the next day which would have solved all of their worries.

I remember them as patients that taught me so much about anatomy and physiology, along with teaching me about trauma and pathology of disease.  Like the patient whose heart is pictured above.  They collapsed in their office and their co-workers immediately started CPR, but they never got pulses back.  That brown "glob" in the middle of the blood vessel in the center of the photo is the clot that blocked the coronary artery that lead to their having a massive heart attack leading to their death.  Another mystery solved.