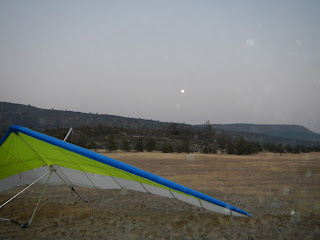 My husband loves to hang-glide, and inevitably, whenever I have a day off and the weather is just right, off we go.  I have to admit, the first time standing there watching my husband voluntarily throw himself off a cliff was somewhat disconcerting.  Now, it's so routine, that I have learned to hold his lines as he gets ready to launch.

Isn't it funny, how after a while we start to learn the lingo of our partner's interests.  While I don't know anything about flying, I can listen to a conversation and even add to it just by everything I have gleaned listening to my DH.  I even sat with his friends once waiting for him to land and commenting to them about some new feature he had just explained to me on the ride up to the launch site.  It's like being able to speak a whole new language.

I could probably put his glider together having watched him many times.  I wouldn't let anyone fly in it, but I could probably make it look like it's supposed to.  Don't get me wrong.  I haven't become that blase about my DH's chosen hobby.  I still imagine 101 different medical scenarios that could happen.  I think about distances to local hospitals, what materials are available for splints or compression of bleeding wounds.  I don't think about it long, but I do like to have an action plan.

I guess working in the ED I have seen too much and know too much about what can happen.  But then, I release the wire and watch my DH take off into the sky, rising higher and higher... and, all I can do it stand in amazement and awe.  And, I start thinking about the next trip... and the next launch... and how much I want to be right there beside him as he takes that one big step and then just glides away... 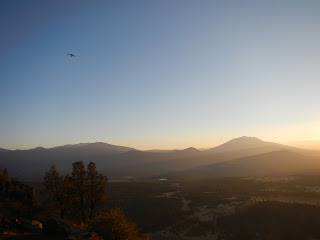 It looks like a fun hobby (for someone other than me though, LOL) but it is neat that you "embraced" his hobby Veronica and got to know a little about it, help him with it, etc. Beautiful picture you posted here too! I'm assuming that is your hubby in the sky?