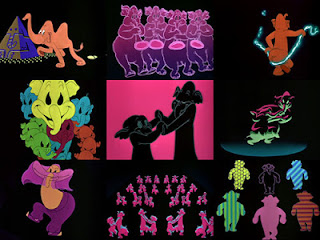 Yesterday I wrote about dreams, and today I am writing about hallucinations.

Now, I can honestly say, I have never been so drunk as to hallucinate.  In fact, the only people I have known to see things while intoxicated also used some other substances.  Although, I did have a friend who imagined she was "flying over the sand dunes" during a trip to San Felipe while in college.  But I don't think that's the same thing.

As a kid, I always imagined being drunk like that scene in "Dumbo" where he and Timothy get drunk and he sees pink elephants.  This leads to that awesome visual sequence involving the song "Pink Elephants on Parade."  I imagined being drunk would be fun, kinda like that... then I went to college and learned about the reality of hangovers.

We get a lot of patients who are under the influence of various sundry substances.  Some of them are still seeing things when they get to the ED, which can be interesting or not, depending on their flavor of hallucination.  Then there's the ever-popular formication which is the medical term for the sensation of "bugs crawling under the skin."  I have had patients actually try to show me "where the worms are" and "can't you see it there?"  Um, no, I can't but ok.

Enjoy the fun kind of drunk:

This is a cute video and the types of hallucinations I wouldn't mind having. I would imagine it would be a weird sensation to have of bugs crawling on your skin when bugs weren't there in reality. I know my MIL had hallucinations of what was in the room with her but not sure if that was also her dementia playing a part (mostly of lizards or squirrels in her bedroom). I know my daughter had audio hallucinations; those were a bit scary at times.

Hey you are almost at the end of November!!!