A Month of Blogs 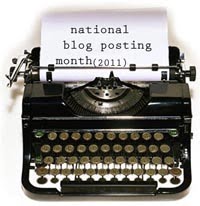 You, see.  I'm a doctor.  You would think I would have tons to write about given I work in the Emergency Department.  But, like I said before, patient confidentiality aside, I live in a small town.  In a smallish area.  Where most everyone know everyone.  I can be at some random medical society meeting and find that the neighbor who walks her St. Bernards around town is the mother of the dental hygenist who is sitting next to me.  So, around here, it's difficult to talk about patients because most everyone will know who I am talking about.

I could talk about my new hobby farm.  Twenty-five acres of pine trees and rolling hills that hasn't had any work done on it for the last 17 years and on which we're still uncovering hidden treasures from time to time.  Not to mention the small flock of birds which I have added and will be adding to:  my little bantams and guinea fowl.  AND, the biggest part of all, renovating and remodeling the house which also has seen nothing done to it in 17 years.

But, seriously, are those things people would be interested in hearing about?  Looking around at the more popular blogs on BlogHer which I've been cross-posting on this month, I'm not a single girl doing the dating scene in the big city.  I'm not the country mom talking about raising my 5 kids while home-schooling and baking pies.  I'm not the city girl living in a foreign country learning how to milk yaks and make my own cheese.

You did it Veronica!! You got to the end of the challenge!! Good for you!! Congrats!! It is hard to write daily especially if you are limited with what you can write about.

I like everything you write, of course I really like when you write about medicine but I know with confidentiality you have to be very careful about that. I do like the posts when you write about the area you live in since I'm just a touch familiar with it, so its nice to read more about it.

And I also enjoyed when you were telling about eating raw and how that was going, etc.

I love your blog, V! Maybe I especially love it because I DO know who and what you write about! I hear your voice when I read your posts, and I always have a reaction! You have made me cry (talking about your uncle), you have made me enthusiastically nod at my computer screen (Juan Soler!), and you always make me smile! Keep it going! elizabeth H.

I don't comment as often as I should, but I like what you write about -- wouldn't read you if I didn't, and I do read every post, even if I don't comment on every one. I like hearing your work stories when it's something you're able to write about, and I like hearing about the farm and house. I remember you showing pictures of some of the interesting things you have found on the farm. So write about all of those things -- and anything else the spirit moves you to write. I enjoy your blog. Congratulations on completing NaBloPoMo. I couldn't do it this year; just had too much going on.