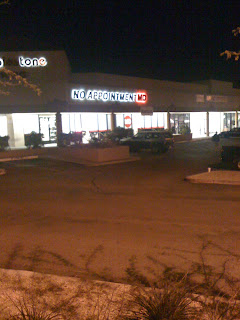 Ok, so I was bad yesterday and forgot to post.  After a day of meetings, errands and a last minute dinner invitation in which there may or may not have been wine involved, I simply forgot about my blog... until I was on my way to work this morning.... Luckily, my work day will provide more than enough interesting fodder to make up for yesterday.

Today I worked my first shift at an Urgent Care.  Kind of like we've discussed the definition of "emergency" let's think about the meaning of "urgent."  To say most of my patients were neither "emergent" or "urgent" is an understatement.  There were so many patients who needed basic dental and medical care that I worry about how much worse it's going to get when more people are insured and there aren't enough primary specialists for these patients to go to.

- five back pains who all wanted medications for chronic back pain.  Most had been having pain for a minimum of 2 months.  Two of them actually had primary care physicians, but they didn't like the care they were getting so they came to UC.  They weren't happy when I referred them back to their primaries... seems getting an MRI and performing spine surgery is supposed to be on my list of services provided.

- seven abscesses came in, some with simple early cellulitis requiring antibiotics.  No big juicy abscesses to drain, bummer.  I really wanted to cut into something after about the 4th patient of the day...

- one complex laceration after a chainsaw misadventure.  I don't know if it was funner suturing the leg or listening to the patient (an inmate) and the corrections officer exchange prison stories.  At least this was a true urgent matter.

- three dental pains who'd been having dental pain for several weeks.  When I ask if you use illicit drugs as you show me the epitomy of "meth mouth" I won't believe you when you deny drug use.  I was told dentist appointments at the MediCal clinic take about three months to get.  I still won't give you narcotics... here's some antibiotics and stop smoking.

- lots of colds and coughs, and it's not even the start of the cold and flu season.

- a chronic headache patient who came in for their fix... and left when I found out I couldn't give IM narcotics because they don't have them in UC... my mistake, but still... the patient did leave.

this along with a patient who demanded a complete workup for an autoimmune disease that they don't have any symptoms for but are concerned about because their best friend has it, and they have a similar rash... really?  Our healthcare (and taxpayer) dollars at work.

LOL about the real ED because I think sometimes the real ED doesn't exist any more; people use it for primary care (as in the case of urgent care experiences you had). However, I think I would have "enjoyed" hearing those prison stories myself....