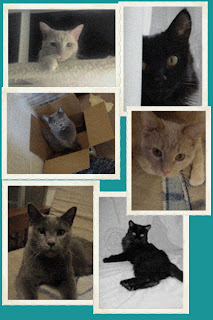 Many of you who have been reading for a while know that I have three cats... Sofie, Lacey and Winston.  They're indoor cats.  Sofie (the buff tabby) and Winston (the grey short hair) have never been outside freely in their lives.  Sure, during the winter my DH would toss Winston into the closest snow pile at least once after a big snow, but Winston always ran back to the porch, preferring to check out the white stuff from a distance.

Lacey (the black long hair) was six months' old when I got her from the local humane society.  She'd been a stray for the first part of her life, so she's been outdoors.  She'd managed to survive despite being deaf, and I think a part of her misses the smells and sensations.  She's the first to jump to an open window and start sniffing deeply.

My DH and I had a discussion today about when we get a house, letting the cats go outside.  We had talked before about getting cat fencing.  I think it's a safe way to allow the cats some outdoor exposure.  I also saw a wire tunnel system set up so that the cat could go freely in and out of the house and through the garden.  The cat's safe as is the local bird population.  He argued the cats should be allowed to run around freely and then brought in at night.

I know cats that live indoors have longer, healthier lives.  I don't want to have to worry about my cats getting run over by a car, attacked by another animal, or getting into something that is going to make them sick.  Hmm... maybe it's time to start pricing that cat fencing.
at November 08, 2010

I'm with you on the cat fencing; allowing them outside time with boundaries. Here since there are lots of coyotes around, there is usually at least one poster up a week looking for a lost cat, makes you wonder...

and down the street the same lady who asked me a few weeks ago if I had seen a tabby cat asked us last night the same as we were walking Koda. I couldn't handle the cat not coming home nightly (sort of like a kid, know what I mean?)