W is for Wanderlust

I think I've mentioned in the past that I am a National Parks fanatic.  And, I sort of have to thank my DH for this, although don't let him know because he'd never let me live it down.  You see, when I first met him, I couldn't wait to show him all of the places around the world where I had been: Australia, Italy, France, Spain, etc.  But, he being the practical one said, "Why should we go out of the country when there's so much to see here in the US?"  Hmm..

So we started doing a lot of road trips.  And, I started making National Parks some of our stops.  Here's the first video I made of one of those first trips....

Along that trip, I bought the book you see there, and I started collecting NP stamps.  And selfies.  And magnets. And stickers.... It's become a bit of an obsession.  Collecting parks.  Trying to plan trips around hitting the ones I haven't been to yet.  And, I tell everyone I know about the beauty to be found in our own "back yard."  I have converted a lot of people into National Park Geeks. 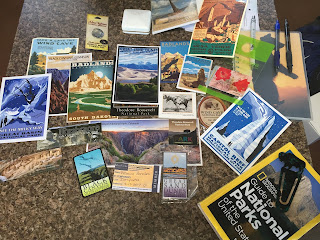 Given all the parks we've been to, to say our refrigerator is full of magnets would be an understatement.  But the fridge has magnets from our world travels too... you see, DH found a love of cruises.  It started off with a week in the Caribbean.  Then a 14 day Panama Canal Cruise from Miami to Los Angeles.  Then another 10 day Caribbean.  And now, anything less than about 14 days at sea seems "too short" for him.  I'd stick an eye roll emoji here if I could.  But, I have always had an affinity for the ocean, and I don't mind the long passages.  What we've seen of the world has been off the side of a ship.

Last year we did a 40 day trans-Pacific cruise.  That was incredible.  People ask if we weren't bored, and to be honest, our days were so packed full of activities that there was no time to be bored.  It's funny how even on road trips you settle into a kind of routine.  And, that's what we did.  We met lots of people on board and got into having meals with them, or playing ping pong, or pickle ball, or gambling at night.  It becomes a small community.

And, you don't even need to know the language.  My DH made ping pong "friends" with some people from Germany.  They'd come up to him, swing their arm and say "ping pong" and then point at their watch.  He'd point at the time on the watch, they'd give each other a thumbs up and a smile, and then they'd meet at the pre-set time.

My mother gave me this love of travel.  I think I inherently had a sense of wanderlust so it wasn't that difficult to always want to be on the road.  Wondering now if there's the possibility of being a wandering doctor... I'll be the one on the side of the road holding up a sign saying, "Will diagnose for ride to....." so watch out for me...

I think its neat you enjoy going to the National Parks. I remember following your adventures of them on Facebook. This country has so many great things to see that I don't think one would ever get bored trying to figure out where to go and what to visit. I do like traveling as long as it avoids flying. We haven't done a cruise yet, but who knows down the line.