O is for Ocean 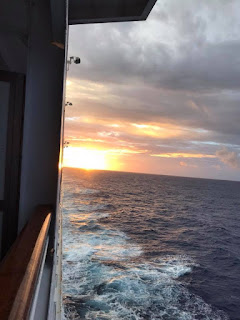 "They say the Pacific has no memory..."
That's a quote out of one of my favorite movies:
"The Shawshank Redemption."

I, on the other hand, have a lot of memories about the Pacific Ocean.
I grew up in SoCal, and some of my first memories are about
playing on the warm sands of Huntington Beach.
My uncle took me fishing off the coasts of Dana Point and Newport.

In high school, all the cool kids laid out on the beach between the Newport
and Balboa piers.
Then I went to college...
in San Diego...
and spent a whole LOT of time on the beach.

I learned to sail in the Pacific.
I did a grunion run.
I kissed a lot a few boys on those warm beaches.
I've flown kites, ridden bikes, and played volleyball.
I've seen a lot of sunsets, and a number of sunrises, over the Pacific.

I've seen the Pacific from the locks of the Panama Canal
as I sailed underneath the Bridge of the Americas,
and have sailed the coastline all the way north to the shores of Homer, Alaska.

Last year, we did the ultimate:
a 40 day cruise from Australia to San Diego.
There were so many sea days,
and we saw the Pacific in all of its moods -
stormy, calm, sunny, gray, bright blue and deep black.

I have wondered in the whales who breached alongside my boat,
watched dolphins swim along in my wake.
I have swum with rays and sharks,
followed a turtle along the shore,
fed garibaldi and angel fish.
I have collected shells of all types.

It may not have a memory of me,
but I certainly have a lot of memories of it and all its wonders.

I truly do love the ocean and the beaches of Southern California. Spent many a day tanning on them in my youth and watching sunsets as I got older. Something magical about that water.