C is for Casino 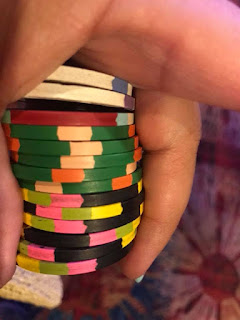 It's weird to say, but I can't really remember a time when I didn't know about casinos.
My uncle, who was basically my father figure, was a member of a golf group
that took a yearly trip to Vegas for a convention and golf.
My mother and grandmother would go along, and, of course, I would be brought along too.

As a child, I knew which casinos had the best shrimp cocktails.
I knew all about how to play Keno, even though I legally wasn't old enough.
I knew that if I picked up a house phone, the operator would page my mom
in Circus Circus and I would get another roll of quarters so I could play more games.
In fact, most of the stuffed animals in my room were from Circus Circus.

Once I was older than 12, even Circus Circus lost its shine, and Vegas wasn't quite as exciting,
but we still went... and went to Reno... and went to a new development call Laughlin.

Once I turned 21, it was a whole new world.
Of course I played slots. But now they were no longer nickel and dime.
They also were no longer real money.
But it was still fun and exciting, and my mother always told me
"You bring a certain amount and that's all you play.
If you win, great. If you don't, that money was for fun
and that's what you came for."

As I've gotten older, slots no longer do it for me.
I learned Texas Hold 'Em and most of the poker games.
Then I met my Southern Baptist husband who really
had never seen the inside of a casino.
He doesn't understand gambling at all...
can't find his way around a slot machine...
feels intimidated at the poker tables...
but Craps...there's his game.
It makes more sense to him.

I play craps along with him from time to time,
but I usually pull off to play poker...
and sometimes you win big...
like the pile of chips I won on a straight flush...

Yes, gotta love the winning. But I always fed it back in, if not on the same trip, then years later. Give me the lobsters and the stage shows (not any more but back when.)
Fun trip down memory lane.