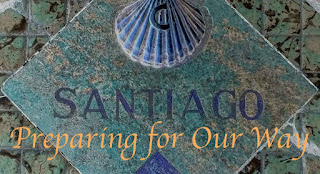 If you don't know about the Camino de Santiago, let me tell you a little bit about it...

It's a long walk...
616 km or about 383 miles along the Portuguese Route from
Lisbon to Compostela de Santiago in Spain
or 780 km or 485 miles along the French Way starting in Saint Jean Pied de Port
which is the traditional route.

It's a pilgrimage...
St. James the Apostle is said to have been buried by some disciples in the Galicia region
of Spain which is in the Northwest corner. A chapel and then a larger temple were built near
the burial site to encourage pilgrims to come to this area.
Soon, thousands of people began the pilgrimage.

In modern times, there are several routes to chose from
and everyone walks (or cycles) the route of their choosing.
There are albergues or hostels along the camino where you can stay
cheaply (about 10 - 15 euros) and now there are porter services
that will carry your bag from hostel to hostel so you can
walk without the added weight.

It's a quest...
By tradition, you have to walk the last 100 km of any of the routes
and collect a number of stamps in a pass book of sorts to get the
Compostela which is a certificate of completion.
When you go to pick up the Compostela you have to tell the administrator
why you walked the Camino... so...

It's a Journey...
"Everybody walks their own Camino"
This is a common quote which people say.
I've read so many stories about how people's lives have been changed
after walking the Camino.
Some go with no expectation,
Some go hoping to change something about their life,
Some go with a purpose...

I am going to walk in honor of my mother,
and to honor her during my walk.

It's a party...
I plan to walk in June/July of 2021.
The Feast of St. James is held every year on July 25th, but
the Feast falls on a Sunday only every 10 - 11 years
and 2021 will be the next year it does so,
and that's when they have the biggest Festival
and the botafumeiro is swung in the Cathedral...
It will be quite a sight!

It's tradition...
The final walk is the 81.5 km or 51 miles to
the "End of the World" at Finisterra
There you end your travels at the Atlantic Ocean
at the Costa de Morte the "Coast of Death"
named by the pilgrims as they followed the Milky Way
to the end of all they knew
and what they thought was a magical place
where you got "closest to the land of death."

I hope to come to this coastline one day in July of 2021
having followed the steps of thousands of others going all the way back
to the 8th century or earlier
and reflect on what will have been an amazing
6 weeks of walking hundreds of miles
and reflect on what my Camino has shown me...

I promise to share it with you when I do...

I did set up a blog for those wishing
to join in on the Camino...
or just support those of us going...
I haven't written much,
but in the next year I will probably start writing more...
Bien Camino!

Never heard of this (not surprising). I subscribed to your blog to get updates. I can't promise what will happen in the next 2 years but the one thing I can do is at least pray for it and your journey and that I will do!