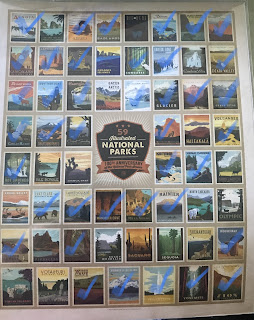 I think it all started with my husband.
Before I met him, I had traveled all over;
Mexico, Europe, most of the state of California.

After I met him, and we started to have a little
more comfortable lifestyle, I asked where
in the world he would like to go.
He said, why go outside the US when there's
so much to see here..?

I hadn't thought about it like that before.
Soon, he and I were taking road trips all over the US.
And, we started hitting the National Parks.
And, I am still constantly amazed at the beauty within our own country.

I can tell you that snorkeling at Dry Tortugas NP in Florida is beautiful,
and that if you go to Acadia NP in Maine go in the fall to see the foliage.
I can also tell you that renting a motorhome and traveling
through multiple states and multiple NP is an amazing way
to see the country.

I've been at 10,000+ feet at Great Basin NP and
down to -282 in Death Valley NP.
I've seen the caves at Windy Caves NP, Mammoth Caves NP
and Carlsbad Caverns NP.

I still have 18 parks to hit, most in the northern parts of the midWest,
a couple in Alaska,
a few still in California,
and the two exotic parks in America Samoa
and the USVI.

I'll get the USVI done in January.

With so many parks to chose from
#FindYourPark

Definitely a good read Veronica. I remember seeing your photos and being amazed at all that beauty. I enjoyed your journey then and look forward to more to come if time allows.