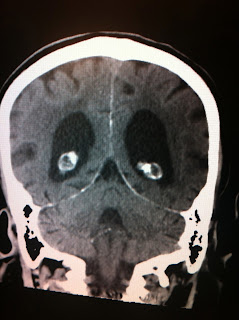 "FOS - or Why I Want You to Eat Your Veggies"

As I was doing a rectal exam on my last patient today, ending up with my hand almost entirely into his rectum trying to get out a fecal impaction (big poop ball from severe constipation), I thought it might be time to readdress one of my "how to stay out of the ED" lectures.  The one about constipation.

The U.S. could save MILLIONS and MILLIONS of dollars if people would just do a little bit of preventative care.... like eating a vegetable-based diet, drinking plenty of water and exercising.  I see so many children (and many adults) with abdominal pain who are FOS (full of s&*^).  Kids that are brought in with "I think Timmy might have a appendicitis" even though the pain is on the left, they're chowing down Cheetohs and Mountain Dew in the waiting room, and they haven't had any fevers or chills, nausea or vomiting.  Or the kids who are brought in at 3 in the morning with the "bad tummy ache" who went to a party the night before where they chowed down on pizza, coke and boxes of Ike and Mikes.

Yes, I know that appendicitis can present atypically, but let's give it a couple of hours at least.  Or, you could do what my grandmother used to do when I complained of a stomachache... she brought out the fish oil medicine.  That was her test... if you still complained of pain after you were completely flushed out, then something might actually be wrong.  I've given parents the "if they continue to have pain or develop a fever after giving them this laxative then bring them back for re-evaluation" instruction many times, and maybe one or two has actually returned, and neither had appendicitis.

And, yes, you can poop daily and still be constipated because if you imagine 4 feet of large intestine being filled like a sausage casing, only a small amount may come out at a time, but it's still full.  And, that continued fullness leads to other problems... like diverticular disease and when that gets infected then it's diverticulitis.

Basically, if you've seen a blow-out on a tire, that's the same thing that happens inside of the large intestine.  It's trying to move your digested food stuffs, but there's not enough fiber and water to push them through without having to strain, so the bowel wall weakens and you get a diverticulum.  If that gets infected then it's diverticulitis.

Diverticulitis used to be a disease of the elderly, but I recently saw my first 20 year old with the disease who needed IV antibiotics and then oral antibiotics.  Yes, while antibiotics can cure this, complications include a ruptured diverticulum with abscess, and sometimes that means getting a part of your colon taken out.  If the infection is really bad, you get a colostomy for six months before they can reconnect the parts.  Imagine showing that to your date in your 20's, 30's and 40's.

So, let's practice a little preventative medicine shall we?  Eat a high fiber, vegetable-based diet.  Drink plenty of WATER... not soda;  soda has no nutritional value and is bad for you even if it's diet.  Why would you put anything into your body that does more harm than good?  And why would you give it to your child?  And exercise.  The colon likes motility.  We're not rest and digest kind of creatures like snakes that crawl onto a hot rock after a big meal, we're moving on, moving on kind of creatures that should be active.

***Caveat:  do not sue me.  I'm not telling you to not come into the emergency department or not to bring your child into the emergency department if they are having abdominal pain.  People can have abdominal pain for different reasons some of which can be life-threatening.  I'm here telling you about preventing disease with some simple things that don't cost a lot of money, but can save healthcare a lot of money, and also save me from having to put my hand up your rectum.

I always feel better, mentally and physically, when I'm being careful about my regular diet. I don't want anyone -- not even you -- having to stick their hand up my rectum. :) So thanks for the reminder!!