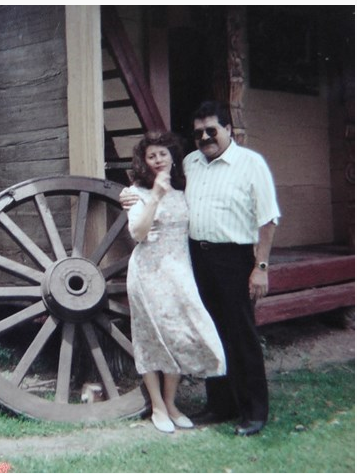 I'm cheating a little bit today, because today we
said goodbye to my Aunt Dolores.

She married my uncle Ruben whom I've written about before.
He was the father figure in my life, and I was
devastated when he died at the end of my intern year
May of 2004.

"Tia Lola" had been his savior both literally and figuratively.
She was a perfect match for a kidney living donor, and
gave it to him without pause or reservation.

Her gentle grace and calm could easily tame this
sometimes gruff and surly bear of a man,
and I saw him change for the better because of her.

She died somewhat suddenly a week ago, and
it was a shock to us all.
But I spoke to her son, and he told me
she died with all of the bravery and reserve
that her undying faith in God gave to her.

She was beautiful inside and out,
and an example to us all.

The song "El Pescador" is a Spanish religious standard.
It tells the story of the calling of the disciples by Christ.
The singer tells how he has nothing but his talents to share,
but if God wants he will join him to be a "fisher of men."

This is a bit of a cheat because I don't actually have this song
on my iPod, but it's because I have yet to hear
the perfect recorded performance of this song...

Still, it's a beautiful song, and I dedicate
to my Tia Lola today.

"Lord, You have looked in my eyes,
smiling, You have said my name.
In the sand I have left my boat:
next to You I will look for another ocean."