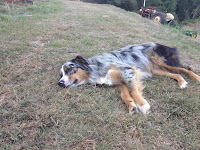 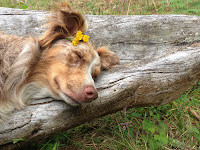 As we reflect on Sunday, a day of rest...

When God had made the earth and sky, the flowers and the trees.He then made all the animals and all the birds and bees.And then His work was finished, and not one was quite the sameHe said I'll walk this earth of mine and give each one a name.And so he traveled land and sea, and everywhere He wenta little creature following him, until its strength was spent.When all were named upon the Earth, and in the sky and sea,A little creature said, Dear Lord, there's not one left for me.The Father smiled and softly said, I've left you to the end,I've turned my own name back to frontand called you "Dog" my friend.

My dear daughter -in-law sent me this little poem when we had to say 'goodbye' to our 15 year old dog.
I'd like to think he 'returned' to God. He was such a wonderful companion. Here's to many happy days with yours Veronica.
Jeanie