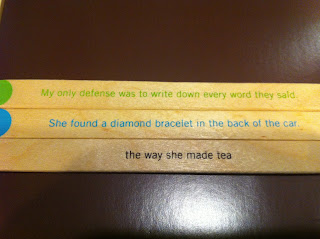 My only defense was to write down every word they said.  I knew that they were on to me.  Only, I had to not let them know that I knew they were on to me.  And, sitting in the back of the diner, trying to listen to a conversation using one of those voice amplifiers which you find only by watching late-night TV and that looks like a Walkman, I had to appear like just another customer.  Not like the "other woman."  Which I was.  Which I was finding out they already knew.

I guess it all started to go downhill when she found a diamond bracelet in the back of the car;  my diamond bracelet.  Which I had lost during one of those slap and tickle episodes which became more and more commonplace as talking at work led to slight flirting, which led to a touch on the arm, which led to my losing a bracelet and her finding it.  Damn.

Even the plausible explanation of losing it while sitting in the back seat while he drove a group of us out to lunch had led to suspicions.  I guess maybe he already had a reason not to be trusted.  Or maybe I didn't.  Or maybe she was just the suspicious type.

He originally told me that he didn't like the way she made tea.  He said that after 10 years of marriage, nothing drove him more crazy than her daily routine of "tea time."  And to top it off, he told me, she wasn't even English.  Yet, somehow she insisted that every day at 4 p.m., they had to dress nicely and sit in the "parlour" otherwise known as their living room and drink tea.

She would spend at least an hour prior making the finger sandwiches (cold sloppy cream cheese with cucumbers and the sides cut off) and arranging vanilla wafer cookies on plates.  She would brew a pot of tea and pour it into tiny china cups.  And, the gloves.  She insisted on wearing gloves.  He somehow managed not to make it home for tea most days, but she didn't seem to mind.  However, he couldn't escape the weekends, and that seemed to make it all the worse.

So, here I was listening to her talking to some detective about following her husband.  How did I know about the detective and their meeting?  Because he was my husband.  About to set out on the trail of a buxomy brunette who may or may not work with the husband.  She was pretty sure my name was Eva.   Myra actually, but he would find out soon enough.  Or, maybe not.  Maybe I could continue to control the situation.  It had worked in the past, why wouldn't it work again...?