What I am doing in case you haven't been following my blog this month...

These are the Sixth Sense cards I pulled tonight... hmmm... 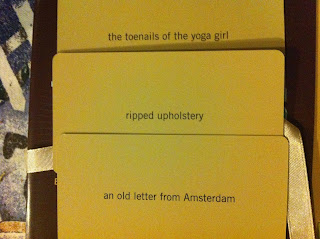 I don't like to be judged when I am just trying to work out, but I knew I was in for trouble when during my "downward dog" I suddenly noticed the toenails of the yoga girl at the top of my vision.  She had them painted in that French Kiss style that is becoming very popular amoungst the Mani-Pedi set.  You know, the slightly curved pink sparkly accent at the tips of her nearly perfect toes covered in a shiny gloss.


I hated her feet.  She didn't have my ugly short stumpy toes.  She had nice, just-the-right-length toes that didn't  look like monkey toes.  No hairs on those well-groomed toes either.  They looked sleek and tanned as though she had just stepped inside from a walk on the beach.


I tried not to flinch as she guided my shoulders square, pushed my back flatter, and opened up my leg stance, all the while quietly giving the class reassurance and guidance into the next yoga pose.  Just when I thought I wouldn't be able to hold the pose a second long, she then called out "child pose" as she stalked away with cat-like stealth to bend another person to her will.


Lying on my back in my living room, I tried to stretch out the muscles that seemed to be on the verge of spasm after my class.  My cat looked down at me from the sofa as I rolled from one side to the other.  She meowed questioningly, and I rolled to face her.  Lord, did I need some new furniture.  My sofa had definitely seen better days.


The brown checkered fabric was tattering at the edges on the bottom, with multiple small threads hanging just above the floor.  The upholstery was ripped along the side where the sofa had tangled with the banister at the bottom of the stairs when I first tried to bring my newly-found treasure home.  You could see the bright red thread where I had attempted a quick fix.  Even that seemed to be fraying at the edges.  The seat cushions were almost flat where I sat every evening to watch "Jeopardy."  Sigh, I really needed a new sofa.

Just as I was about to get up off the floor and get some dinner, I noticed a piece of paper stuck on the bottom of the sofa.  I pulled at the corner thinking it was a Post-it note that had somehow made it's way under the sofa.  It seemed caught.  I got closer and found that the paper was thicker than I had imagined.  I reached under the sofa and pulled hard.


It was an envelope with barely legible writing and a foreign stamp.  I couldn't make out the writing, so I pulled the letter out.  The script was light and feathery across the page.  At a glance I knew it wasn't English, but I couldn't discern the language.  Maybe something Norwegian?  I caressed the sheer satiny slightly brown paper for a moment;  feeling something from another time.

As I slid the letter back into the envelope, I began to imagine that it was an old letter from Amsterdam.  Maybe a love letter that had to be suddenly hidden in my sofa so that a spouse wouldn't see it as they suddenly entered a room.  Maybe the person had never been able to retrieve the letter, or maybe they had just forgotten about it.  Then the sofa had been sold, left behind, tossed out onto the street, found by me and brought upstairs.


Putting the letter up on the shelf while I concentrated on more mundane things like feeding myself and my cat for another night, I allowed myself to daydream.  For a few minutes I could be in a different world where my toes were perfect and brightly painted, lying on a new plump sofa, reading a letter from my lover.  If only life could be that perfect.