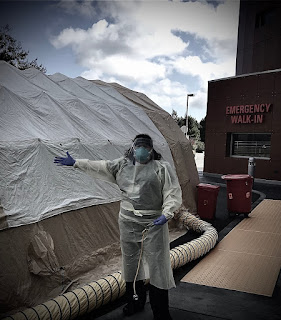 So, the challenge continued. In just about a week's time, I've gone from fun-loving, cool ED doc to expected specialist in epidemiology, infection control, risk stratifier, and it's gotten to the point I've actually started keeping up with the medical literature on a daily basis just so I can have the latest information about this whole thing... it's becoming very stressful, and I am so glad that I only have one more day of this before I take a long six week hiatus. Hopefully, on the other end of that, this will have been a true learning experience for all of us.

You don't think about illness much when you become a doctor. I mean in terms of what can happen to you. Sure, you're careful to avoid needle sticks. Work place violence has become more prominent. You know when cold and flu season starts, you'll inevitably get coughed on by that 2 year old just as you lean in to listen to their heart, and BAM! about a week later you're coughing with a runny nose... or worse, what we used to call in residency "the pedi flu" which you'd always get during that first week of your rotation back at Children's Hospital and which had you running to the bathroom for one thing or another. That was the worse.

But in terms of being scared about something, I don't think we are. At least, I can't think of anyone on my staff that would back down in the face of an epidemic, or pandemic, or whatever is before us at the time. We come to work, we gown up, and get to moving. We help each other. We support each other. We work together.

And, that was always the draw for me when it came to Emergency Medicine. While I loved the challenge and instant gratification of surgery, it felt more like a soloist instead of a chorus. We may squawk and balk at each other from time to time, but when there's a code, when there's a patient in need, when there's a catastrophe of any kind, the team pulls together to make things happen.

One of the best compliments I ever got from an RN was that they would "always be glad to follow me over any hill." You always think about the doctor sort of running the show, but there's a difference between a director and a leader. The director tells you what to do, while the leader shows you what to do by their example. My codes are generally calm and not chaotic. I listen when the nurses tell me their concerns about their patients because they're the ones spending more time with them. I take the time to teach whenever I can so that we always know and understand what we're doing together...

Like today... I electrocardioverted (shocked) someone out of an irregular rhythm. I diagnosed two people with abscesses and infections (one got to go home, the other had to stay for a more serious infection), I saw my meth patient back again for a dressing change and antibiotics (they actually looked like they'd showered and had done a bit of grooming), I saw and worked up and discharged two chest pains, I dealt with a patient who seemed to want to have something wrong with them (they stated they'd been having abdominal pains for "years" and had just seen their doctor 2 days ago after which they went to the another ED where they got a full work-up and evaluation, then came to my ED because they wanted a "second opinion, I reviewed everything from the prior ED, went over their results, and every time they brought up a new complaint - abdominal pain became chest pain became "are you sure I don't have a tumor" which I reassured them they didn't because the CT scan would have shown it, and I had worked up their chest pain because that had been their initial complaint at triage even though they told me they'd come in for abdominal pain, I referred them back to their PCP and to GI for evaluation of their multiple complaints), I had the drunk that had to sober up,  I had the drunk that was sobering up and going into DT's, I had the singing psychotic decide suddenly that clothing was optional and wanted to run around the department showing this to everyone, and I had a couple of patients that required me to put on my new body armor and go into the big scary tent... now I have to check my temperature every couple of hours, but I'll still be back to work tomorrow for that last day at this hospital... then I'll self quarantine, sort of, for the next several weeks...
at March 15, 2020

Its interesting in that you don't hear of too many health care professionals getting Covid 19 at least now. Thank you that you and your cohorts are willing to put yourself into danger to take care of us!!!

It's much better when those who lead are hands-on. They are the ones who appreciate the work of everyone else in the department.