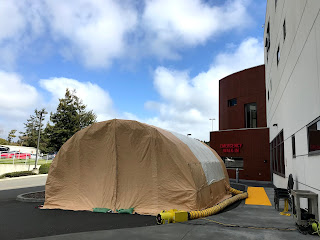 And, so it's come to this...
A tent just outside of the ED to help contain the flood of
sick, maybe sick and worried well.

And, just when I thought I just had to make it through
3 more shifts and escape from all this craziness... 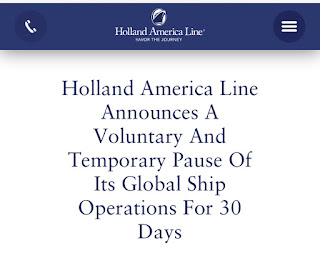 So, now I have a whole month off to sit and ponder my future.
Well, according to my DH, not actually sit, but pack
and start getting ready for a cross country move a little sooner than expected.
Without any massages or facials or body wraps... sigh...

Hey, at least, all of our suitcases were packed.
Now we can just load those up and be ready to go...
anywhere...

But, for the next three days, it'll just be more of:
- known drunk comes back in... drumroll... drunk; seriously, I just saw you yesterday

- known infection comes back in with infection after leaving the hospital to go do meth;
surprisingly, not the same one as yesterday, although the one from yesterday did come back too,
they just left because they weren't being see fast enough
and that's because my nurses, in full hazard gear, were swabbing noses and throats
out in people's cars... the ones that met criteria... there were a lot that didn't...

- and there was the patient that was seen a couple of days prior, had a negative
work-up, came back because they left before they were given discharge instructions
and were actually feeling better but still wanted to know what was wrong with them
because Google told them that they might have a "blood clot" that "migrated from between their shoulder blades to their pectoralis muscle" and made them cough... I tried to explain to them that
yeah, that's not how that works... and they told me I didn't understand because I hadn't heard the "whole story" at which point I heard every small detail of their life from sleeping on the floor,
to taking their kids to school, to having something to eat, then taking a nap, then the "blood clots" migration from back to front and now gone, and how they were sure it was a "heart attack" because they felt their heart "exploding into pieces" that one time they were in a meth-induced haze
and how they've had many "undiagnosed heart attacks" because they felt that way
several times... that was when my head exploded...
when I walked out of the room I was imagining myself on a long ocean cruise...
which is now not to be... sigh... 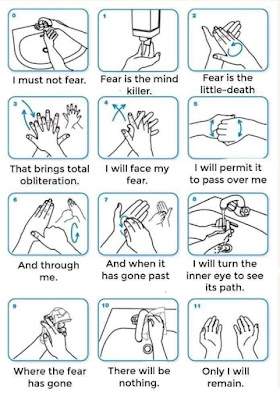 That's a great prayer to pray. Such unnecessary madness. Sorry you won't be able to get your cruise in though!! Now just 3 more left!