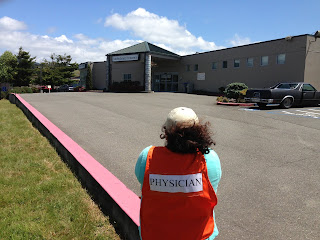 So about 9 years, 5 months and a week ago I started as an attending
at a small hospital in Northern California.
This is how it went.

Today I started the last of 5 shifts that I will be working
at the slightly bigger sister hospital.
This is how today went:

cardiac arrest came in, after about 30 minutes of CPR and putting in a breathing tube
we got back pulses... then I had to stop the ventilator because we found out the patient had a DNR (do not resuscitate) and the family member let us know that they had wished to not have anything done,
so that was a little frustrating

during that time, a patient came in with a really low blood pressure and fast heart beat,
hung some IVF and some pressor medications and got them under control,
admission to the ICU

then I had to clean up the mass of patients that had come in while I was working on the cardiac arrest and patient with low heart beat
they included:
- a chronic drunk who was drunk again and needed a room to sleep it off
- poison oak allergic reaction
- patient with shingles
- patient with problem with their ostomy
- a chronic meth user that left the hospital to smoke meth and was now returning
because their infected foot somehow did not magically get better without
antibiotics and wound care, not to mention running on it barefoot in the woods
while high on meth
- an elderly couple both with dementia that went on a joy ride and ended up driving down
an embankment
- a patient who passed out and hit their head and who could now not move their leg
AND
I had to manage the patients signed out to me by my colleague in the morning
which included:
- an appy
- a pregnant appy
- a car crash victim with abnormal vitals
and a couple of people who didn't like their lives any more
so needed psychiatric help

AND
in the midst of all this a code was called on the hospital floor
and I had to run upstairs and put a breathing tube in that patient
while they were doing CPR...

... the patient later coded again in the ICU and didn't make it...

AND
not to mention a lot of phone calls where we had to triage and decide
which patients actually needed COVID testing... OMG

The one bright spot in my day was a visit from a patient
who'd had a serious brain infection which had to be transferred down to
the big city children's hospital where they underwent
brain, eye and sinus surgery,
IV antibiotics,
physical therapy to help them be able to walk and move
their right side again
and here they are a month later looking
bright and a lot healthier than the day I saw them...
this is them: 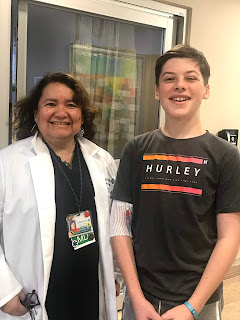 I hope he does amazing things...

I LOVE the last story. Makes all we do worthwhile :)

And now only 4 more shifts. Wow what a day!! Did you have time to eat during it?

They are all going to miss you and your expertise. Thank God you are on this earth! Stay well yourself. 🙏