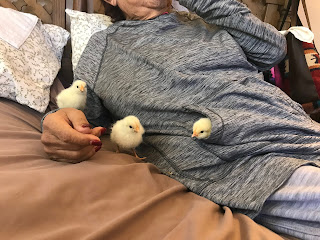 Momma was our chick whisperer...
Whenever we'd get a hatching or orphaned chicks,
it was Momma's job to raise them... 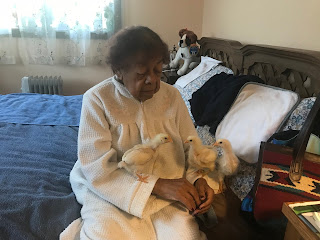 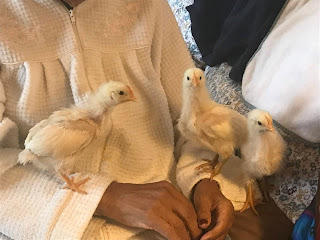 She'd fuss over them,
talk to them,
feed and clean them...

They'd stay in her 80+ degree room until they were
big enough to join the others in the barn.
That was always a sad day for Momma.

But soon there would be another orphan chick to raise...
Like Baby... 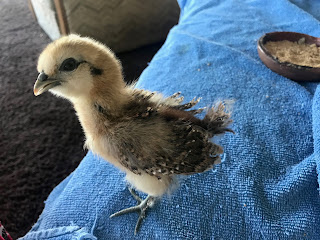 He was the last chick Momma raised,
and I really think he was her most favorite of all.

He followed her everywhere.
He'd climb on her walker and get pushed around
the kitchen and her room. 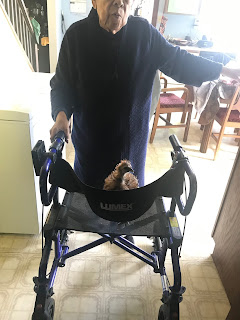 He was one very spoiled little rooster,
but alas, even he eventually had to move out
to the barn.

But Momma would stand at her window looking for him.
She'd ask how he was doing.
He is so tame you can walk up to him at any time and pick him up.
I'd bring him in the house for her to fuss over
before taking him back out with the other chickens. 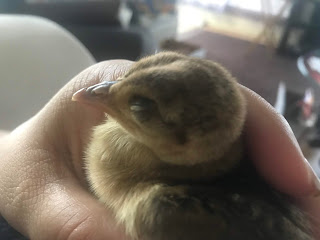 Now there's a new baby in the house...
a little peachick we're calling "Petie..."
And, there's no Momma here to raise it...
So DH and I are having to do the mothering... 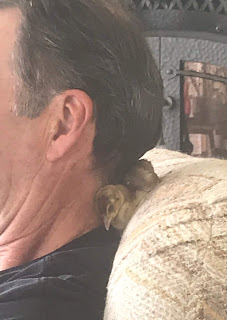 I think of Momma and know she would have enjoyed
seeing this little one grow up.
She loved to see young animals.
That's why she enjoyed the farm so much,
especially the new chicks.

This winter she got to at least see the first lamb born
on Boxing Day and pet him.

During her last weekend at home,
all 8 of the spring lambs bounded and played
just outside her window.
And her little Baby, who's just learning to crow,
called out in his fledgling rooster voice.

I wonder sometimes if Baby misses her somehow...
I'm sure he does...
She was his Momma, too...

How cute! She had a gift with them indeed! I truly think God gave her that gift of the 8 lambs playing outside her window. I'm sure she delighted in seeing them and I am sure she is missed by so many humans and furry creations.