A story from the road...

After meeting up with some friends in Jacksonville, OR we continued westward heading to Lakeview, OR.  The city is known to be "friendly to hang gliders" as could be witnessed by signage all over town and in the local restaurants.  We decided to take the dog for a walk around town to stretch our legs and take some pictures. 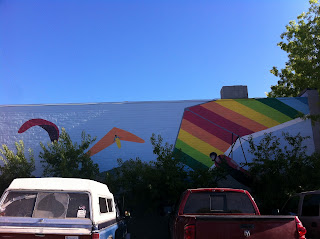 In fact, I had just taken the above picture when all of a sudden we started hearing a hissing/ticking sound... If you've ever seen one of these, you know what I am talking about: 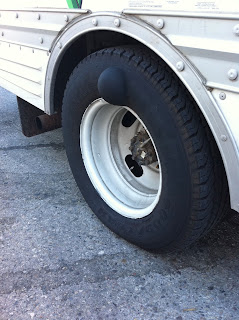 It was defect on the side of a tire on the last truck seen in the mural photo. (The above photo is what happened to our moving van when we came cross country.)  Anyway, it's like 90-something degrees outside and this thing starts getting bigger and bigger.  I'm just telling my husband it's about to blow and turning away when "BOOM!!!" the thing pops.

People across the street start yelling as we're trying to recover our hearing from the explosion.  There's a big hole on the side of the tire, and it's flat.  As we considered where the owner of the truck might be (local bar we guess), we took some more photos and continued our walk eventually heading back to our hotel room.

We'd just gotten the dog settled in the room and were out the door heading to dinner when a sheriff's vehicle pulled into the parking lot.  I figured they were just going to ask us about the tire that blew, but it seems we were being accused of slashing the tire!  What we found out later (once the local police chief and another police officer arrived and asked several more questions) is that there's been a rash of tires slashings in the last couple of weeks, and when the tire blew, someone reported that "a couple with a german shepherd" were in parking lot when the tire was slashed.

The sheriff seemed reasonable, but one of the other officers seemed a little more accusatory and brusk telling us "don't leave until I get back" when we explained about the truck tire defect blowing and showing some of the pictures we had taken of the truck before the event.  After a few more questions and taking our information, they let us go and we headed off to dinner.

DH was very upset by the whole event, and I can understand.  Not only did someone acuse us of doing something which we didn't do, but the local law enforcement hadn't even investigated the scene.  Then there's the matter of the sheriff showing up at our hotel which means someone either followed us back to our hotel or the sheriff just happened upon us while searching the area for someone matching our description.  We also found out that the accusing party was known to the cops for some previous belligerent behavior so DH was a little upset that they took their word/report at all.

Anyway, it made for an interesting, um, welcome to the small town... Yeah... 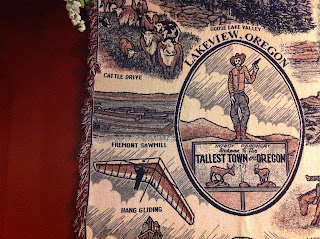 I can see what your hubby would be upset, Veronica. This is one of those times (that seems to happen a lot) when a person is guilty until proven innocent instead of the other way around by how law enforcement treated you guys. I'm betting that town won't be on your list to visit again anytime soon.

Unfortunately because of similar incidents with son (who was guilty of some things but not guilty of a lot of things law enforcement wanted to get him on) I've developed a distrust of some law enforcement. I appreciate their efforts and puttng their lives on the line for our safety, but after hearing incidents like this.......makes me build up a tougher shell against them.

Hoping your next road trip turns out better!

I would have been VERY upset too!