Ghost of Dorm Rooms Past 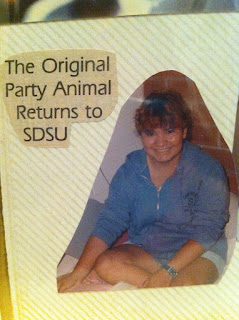 I was visiting my mother this past week, and I started digging through some old boxes in the closet of a room that used to be mine while growing up. I had reconnected with a childhood friend on Facebook, and I knew I still had the letters we exchanged during our high school years. Yes, I am a closet hoarder.

Anyway, amoungst the other things I found in one of the boxes was a scrapbook photo album that I had created when I started college back in 1985. Wow. It's incredible to think that it's been almost 27 years since I was this bright-eyed freshman who was out to conquer the world, and who had yet to suffer any disappointments more severe than not getting my first choice in class schedules. The things I would love to tell this old me.

Combing through all the cards and letters (remember when we used to have to actually write something down and send it via mail?) I read through stories of friends lost, loves lost, crushes crushed... you get the idea. I read letters signed "friends forever" and can't remember the person behind the name. Where did I meet them that we "had such a great time with you, and can't wait until you visit again." What happened to that girl who used to send me birthday and Christmas cards addressed to "my sister" because we were such good friends? I lost touch with her when she dropped out of college and then wouldn't return any calls or respond to any letters. Last I heard she was studying archeology, or something like that... wonder where she is now...

And, who are all these people in these pictures, and what happened to them? Some are in multiple pictures. Some we're hugging on, some we look like we're just putting up with. This one was studying medicine. This one was a drama major. This one broke my heart, several times. I carefully put back all the letters and photo album into their boxes.

I didn't have enough time on this trip to carefully read through the pile and decide what to keep and what to throw away. A few pictures I did photograph, like the one above, for future Facebook blackmail.  Go back and do it all again...?  Maybe, but could someone please tell the old me how to work my gaydar earlier rather than later because it will save a lot of angst and frustration in the years to come.
at February 03, 2012

It is interesting how we thing we will be friends with someone "forever" and then a few years later we even forget their names, etc. I have come to think we have seasons of friends and unless we stay in the area, and even then we may grow apart, I'm sure it is few and far between that someone has a friend over multiple decades. I bet it was fun though to go and look through things and at least remember the time (if not all the people) from that particular season of your life!

And I know your mom enjoyed seeing you for a visit!