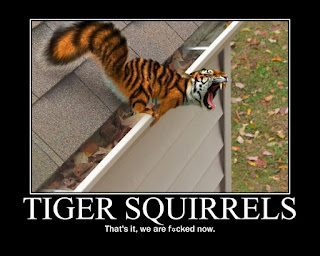 Life has changed quite a bit since we got a dog.  It's like having a baby without the possibility of sending it off to boarding school once it turns five years old.  My DH and I went through a period of yelling at each other over random things during the first week mostly because we were sleep-deprived from the every hour potty trips to get the dog housebroken.  Dixie's done very well, though, so in the long run it was worth it.

But, seriously, life revolves around Dixie and her schedule.  We wake up early to take her out, then it's breakfast time.  We play for 30 minutes then it's potty time.  More play or a long walk and then it's nap time.  After our her nap, it's usually about lunch time.  Another 30 minutes and it's potty time again.  Then more playing, more walking, more napping.  Then comes dinner time.  The next 30 minutes passes, potty time, play time, snack time, then finally bedtime, with one more potty run just in case.  And, we wake up and do it all over again.

And, when I say "we" I mean my DH.  Why, because I am usually working most days of the week.  You see, I like to travel, and that means consolidating my 16 shifts into usually 20 days out of the month because I want the other 7 - 10 off for different adventures.  This month, I had to fit in a spontaneous trip back to So. Cal with a course on public speaking and our yearly anniversary trip.  And, I only had 29 days in this month's schedule to do it in.  So I am working, A LOT...!

Which means I am not available to help with important things around the house... like unpacking all the boxes we had to move from our rental or planting the trees we bought a week ago... So, my house looks like a scene out of "Hoarders" and the trees are lying on their sides in the back yard pond.  Also, I keep thinking of things I need, but I don't know what box they are in or if it's easier to just go out and buy a new one at this point...

Work is the usual combination of a few real emergencies mixed in with the plethora of non-emergencies and a peppering of crazies to make the shift just that much more interesting.  Like the guy whose chief complaint was "eating all the time."  If you want to know what makes medical care so expensive and where your hard-earned tax dollars are going, it's to support people like this.  He wanted me to give him medications to make him stop eating so that "he wouldn't get fat" because if he did then he was "going to fly to Switzerland to see the 'doctor' who performs assisted suicide on non-terminal people."  He asked me for amphetamines and anti-seizure medications to help him with his "problem."

If I can't keep a straight face during your initial exam, I don't think I can help you...

I also can't help:
- any symptom that has been present for longer than 48 hours, that has been extensively worked up by another doctor, and for which the cure is, in your opinion, more pain medications
- children whose parents insist on smoking (oh, I only do it outside with a smoking jacket) when their child has a cold/asthma/repeated ear infections;  I actually had one mother break down in tears at her daughter's bedside when I admitted her child with asthma, she dramatically threw her pack of cigarettes in the trash and apologized to her daughter for making her sick... funny thing is I saw her the next morning in the smoking hut where she was taking a break from visiting her daughter
- bad teeth:  I am not a dentist, I don't pull teeth, again stop smoking...

LOL, Veronica, I had to laugh about the comments with getting use to Dixie; they do rule the roost more than a child does I think. We plan EVERYTHING around Koda and his schedule, including the thought of getting away for a weekend out of town doesn't appeal, wondering where to board him who will cater to his needs with his two time a day insulin shots, etc. It is nice for your hubby to be there to help out and do the majority of the care for Dixie, but she is probably a great companion for him when you are working. It will slow down with her care too as she develops the bigger bladder and the ability to let you know when she has to go outside so that hyper vigilance isn't so much.

It does sound like a wild adventure working in the ER. I often tell hubby some reports I type from it; ERs sure have changed from what they were supposed to be; I think they are a lot of people's 'family doctor' and of course there are those drug seeking patients.....(like you guys aren't wise enough to spot them within 5 minutes of their arrival......)

do take care of yourself!

Hello Veronica! I enjoyed reading this entry. How well do I know having a puppy is so much like having a baby in the house. I haven't had a puppy in years but I am getting ready to start that journey again shortly. I miss the puppy breath, the naps with little snores and the potty breaks.

It will be 3 years in September I've quit the cigs. Once I put them down I never looked back.