This is Your Brain... 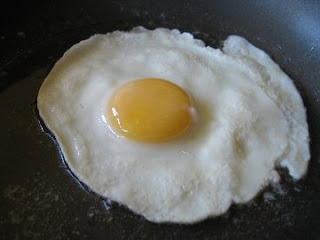 I think I've commented in the past that there are some things I don't quite get... like psych patients.

Now, people on drugs or alcohol, yeah those I can understand because anything goes when you're under the influence, but psych patients are their own special flavor of interesting.  I was thinking about this a couple of shifts ago when I had a patient convinced that the scabs on their skin were due to worms invading their body... worms with antlers.

How did she know they had antlers...?  Well, now, because she took a scientific approach and viewed a skin scraping under the microscope where she witnessed said worms... and they had antlers on them.  Of course, there are a whole number of things wrong with that last statement; ie: like who has a microscope just sitting around the house...? (well, actually, I do... ) but, still.  It's just not something you hear every day.

And, she was quite convinced that the antlered pin worms that, by the way, came in assorted sizes and manifested in different colors as they made her way out of her body were slowly making their way up to her brain via her ears.  So much so that she came to the E.D. for us to do our own skin scrapings so we could begin treating her.  She kept trying to show me where the worms were coming out, but I just couldn't see them.  What I did notice was the skin infections she was giving herself from picking and scratching at her skin over and over again in an attempt to remove the worms.

I gave her antibiotics for her skin infection and antihistamines to help with the itching.  When she insisted she needed something to kill the worms I somewhat tongue-in-cheek asked her to bring me a worm sample in a jar so that I would know what to treat her with... She nodded and said she would try to catch one for me... oh yeah... can't wait for that E.D. visit.
at January 05, 2012

That does have to be hard, Veronica, to deal with those who are convinced of something like this woman was. I can only hope she doesn't bring in a specimen.......