All the Lonely People

This is cross-posted from the professional blog I write for....


I know that the holidays can get really depressing for a lot of people, but I had three patients over the weekend that really got me depressed because of their situations. I always said that I would never make a good psychiatrist because I would tend to internalize and identify with my patients, and so that’s why I enjoyed surgery so much. There’s quite a bit of distancing that happens when you’re behind a mask looking at a square of skin.
As an E.D. doc, though, we’re up close and personal with a lot of our patients, so it’s back to internalizing and not having the luxury of a sterile sheet between you and your patient.
Patient One crashed their car. They are homeless, so their car is like their home. Everything they own is in there. They had just gotten kicked out of one “fleabag” motel and were on their way to find something better along the coast when they lost control on a curve. Now, all they have is the clothes on their backs. Well, actually in a hospital bag because they were stripped down to a hospital gown when they arrived. They’re bruised and battered and slightly torn. And, they have no one and no where to go. I can discharge them because, luckily, they didn’t suffer any major injuries. But, they have nothing. So they get admitted. Social Work and Discharge Planning can figure out what to do with them in the morning.
They used to have a life, and friends, and a home. But then they were forced to take early retirement from their work. They lost their home and their social network. They can’t afford housing on a fixed income. So they roam… in their car… from place to place.
Patient Two had a nice home, and a wife. Then their wife died and a part of them died too. So they turned to alcohol to help deal with the pain. Soon their nice home deteriorated as did their health. They have a neighbor who checks on them from time to time. Their neighbor brings them in whenever things get too bad. Patient Two can’t see their PCP because they have an outstanding bill, so the E.D. becomes their PCP. Diabetes out of control again? Yep. Bad cellulitis on your legs again? Yep. Anything new? Yep, pressure ulcers on my bottom from not getting up out of my chair for the last three days because my legs felt too bad. Am I going to be admitted? Yep.
Patient Three has a psych history. They’ve been in and out of the system their entire life which is only 50+ years long so far. They have the look of a 90 year old man. A neighbor stopped by because they hadn’t seen them for a few days and found them looking slightly worse than usual. Not eating or drinking. Somehow, though, they continue to smoke despite the rattling cough in their lungs. How the cigarette paper doesn’t just rip their Sahara Desert dry and cracked lips to shreds is beyond me. Must be the warm stale beer that somehow is within reach. Another admission for “Failure to Thrive.” It’s the least I can do.
Three hots and cot… at least for tonight… at least for today…

All the Lonely People 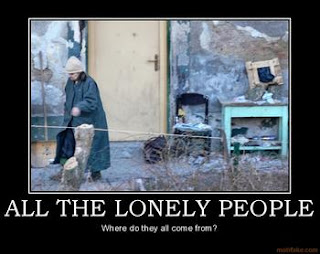 I didn't realize this was your experience, Veronica. See I knew you were good at it! I should have caught that since there was mention about surgery and I do now remember you previously worked as a surgeon.