To say that my mom LOVES telenovelas would be an understatement.  She can't go on vacation without fearing that she's going to miss her daily "stories."  And, not just one, she's usually following two, and sometimes three.  We sometimes have had to plan outings around finales of her Telenovela.  That's Spanish for soap operas.  The great thing about about telenovelas, though, is that they only last a short period of time so that you're not investing years and years, usually just about 4 - 5 months.  Almost the same as you would in a sitcom season, but these are daily hour-long episodes.
Despite my mother's repeated attempts, I usually try not to get sucked in, but there's one out now that I am completely fascinated with.  It's called "Cuando Me Enamoro" which loosely translated is "When She Made Me Fall in Love With Her."  It's a tale of love, lust, revenge, mistaken identity, kidnapping, murder... otherwise known as your typical telenovela.  This one is just getting started, but I can barely stand to let an episode go by.
I record the episodes daily, and I usually try to wait all week to see them.  Obviously, I don't have a lot of self-discipline because I find myself rushing home so I can see that day's episode.  I was good this week... at least I saved up three.  Now I am jonesing for the next one... what's going to happen now that the main couple is together?  What's the evil sister going to do now that she's pregnant?  And can anyone be as handsome as Juan Soler the Argentinean leading man....? 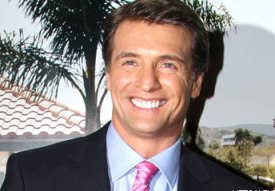 Ah, telenovelas, where men are men, and women are conniving, murderous wenches... now that's a story I can get lost in.
at May 25, 2011

One day my husband, daughter and I went to a Chinese restaurant and there was a Chinese soap opera on the TV. The waitresses were mesmerized and after a bit, so were we.

The plot is all the same no matter what language, and we were able to get the gist of the story.

yea!!!! I can post a comment!! I hope Blogger gets this fixed soon! I couldn't post on my own journal, LOL, until I changed it to a pop up window! I was also going to say confession time here, that when my mom lived with us years ago, she liked the "rag" magazines I called them (National Enquirer and the like). I would buy them for her from the store, but then I could hardly wait until she was done with them so I could read them, LOL. So when I read about your enjoying these novellas, it made me think of this with my mom. Good clean somewhat innocet fun!!