Requiem for a Goat

I know I haven't written in a while, and I honestly thought I would be writing about the new puppy in our life.  Instead I find myself writing about another death on the farm.

Boots was born on May 15th of this year.
She died on Sunday the 16th, just a day past turning 4 months old.

And, today we buried her.

I've been feeling like a bit of failure.
When we had the massacre weekend, I promised Boots that I would take care of her.
We took her to the breeder and then brought her back after 3 weeks.
And, as I wrote back then, she was never quite the same.
I called it goat PTSD.

Then we left for an extended trip to get our new puppy and when we came back
Boots had developed "bottle jaw."  She became severely anemic and within 10 days she was gone.

At one point, I thought she was going to recover, and she fought so hard,
but then she became much worse despite all my efforts to help her:
bottle feedings, antibiotics, IV fluids, etc.
In the end, all I could do was sit by her side and make her comfortable.
She called out once, and then was still.  She'd lost the fight.

She died on a beautiful sunny day.
We'd actually sat out in the sunshine for about an hour earlier,
I had wrapped a blanket around her to keep her warm.
All the other animals seemed to surround us.
It was a lovely scene. 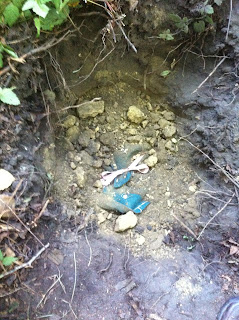 This morning my husband picked out a spot on our property amoungst the pine trees;
just a little bit down the path from the back of the barn where she was born.

I wrapped her in the blanket that had helped to keep her warm during her illness;
a pink ribbon secured everything in place just as it had helped keep the blanket on her while she was alive.  She seemed so tiny as I laid her down.

We said a few words about what a good goat she was,
and how a lot of people who had never met her loved her through my photos and blog.
I apologized that I hadn't been able to protect her the way I promised.
And we told her that at least now, she was with her mother, her auntie Betty,
and her playmate Jazz in some goat heaven somewhere.

My husband who considers all animals as utilitarian rather than pets actually got misty.
I openly cried.

I hesitated as I tossed down that first shovelful of dirt.  I didn't know that I could do it.
But, there really was something kind of cathartic about doing the work.
In the distance, the other two goats, Laverne and Shirley started to bleat.
We called it the "two goat salute." 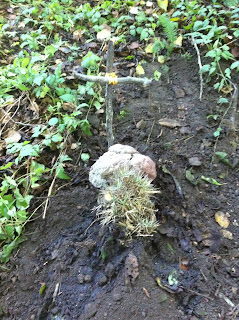 I made a small cross, we laid down a stone as a marker, and I planted flowers.
You can call it sacrilegious, but I believe in a God who loves all of His creation,
and in a Heaven where all creatures are welcome. 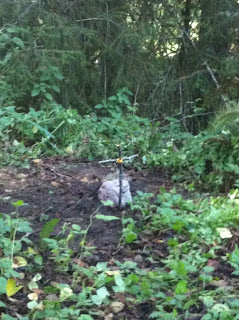 As the first creature born on the property, you became my hope
As I watched you grow, you became my joy.
You were loved, and you will be missed.
You will never be forgotten. 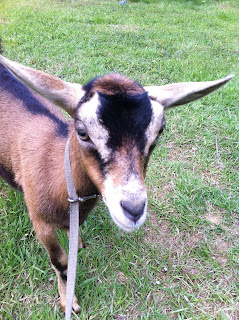 Yes..she did have such a short life.. but she was well loved and cared for in that short time.
Farewell Boots! Enjoy life over the Rainbow Bridge.
Jeanie xx

What a wonderful tribute to Boots. I don't think you failed her, Veronica. You did bring her back to where she was born and you were with her at the end; she knew she was loved.

Again, I am sorry for your loss.