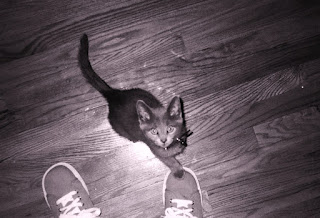 "Extremely Playful"
That was the sign I missed next to the cage at the Anti-Cruelty Society in Chicago back in June of 2003 when I went to pick out a kitten as a playmate for another kitten I had found.  He was alert, active, and I put in for his adoption.  Several forms, a class on correctly "disciplining" your cat, and all the usual checks to make sure my landlord approved, I had the appropriate income, and confirming payment of the neutering and he was mine.
That's when I noticed the sign... and he lived up to that warning. 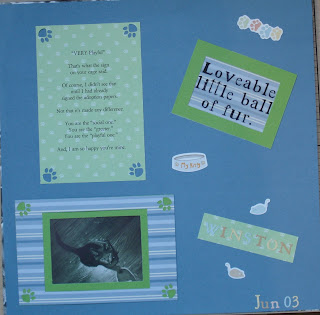 I chose the name Winston Churchill after the cat in "Pet Semetary."  Although, unlike that cat, I called him Winston instead of Church.  He was more of a Winston.  And, I like to say his name suited him because he was a pistol.  At that time, he was 11 weeks old and I introduced him to Sofie who was the same age.  They became friends and have been life-long companions. 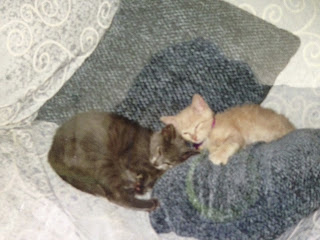 He was my source of joy and frustration during that intern year.  Mostly joy; although I didn't appreciate finding my figurines and picture frames being knocked over when I came home after a 24 shift at the hospital.  But, he was always there with a purr and a head butt.  His spot on the bed was right behind my knees.

My husband taught him to jump up on his shoulder.  He was also the one to introduce Winston to the first snowfall every year.  Winston did not appreciate the snow plunge but somehow always came back for more. 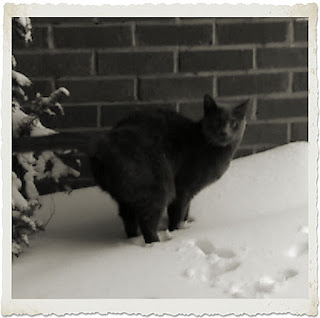 Winston was well-travelled having made the move from Chicago to Boston to Minneapolis and the suburbs outside of St. Paul, to Buffalo and then finally here to California.  We almost lost him in a truck stop about 2 hours outside of Chicago.  I was transferring the cats to the car because they were starting to get agitated in the moving van.  Winston panicked during the transfer, escaped the cat carrier, and ran through the lot.  I found him under a semi hiding in the tire well.  Thirty minutes later, both of us covered in dirt and axel grease, I had my cat.  I wasn't going to leave without him. 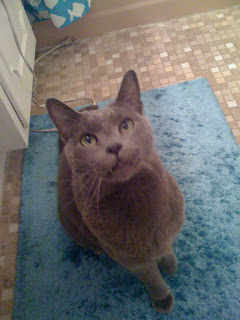 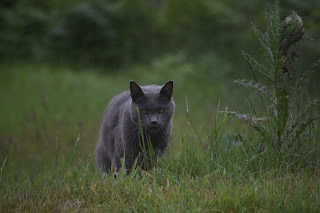 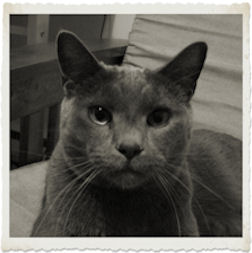 I called him my "big brute" because he was such a large cat...
and because he would push Sofie out of the way to get the cat food
whenever they were fed. 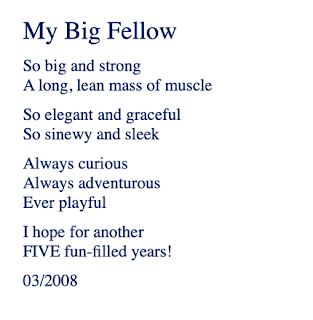 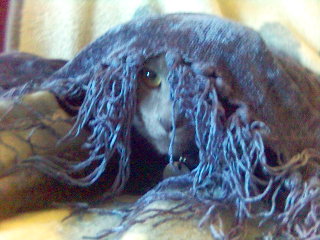 At 16, he was still the "greeter" and came out to see everyone when they arrived, but his age was showing and he wasn't doing well.  We knew it was time to say good-bye. 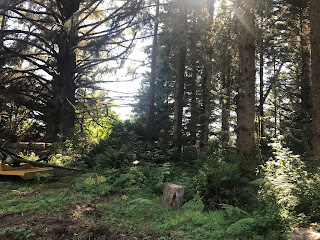 A couple of days ago, I went looking for a spot.  I picked out a place just off a grove of pine trees.  It's at the top of a hill leading up from our house.   I call the area "Nori's Grove" after a friend who died.  I have memories of her coming out of the trees carrying an armful of mushrooms.  So it's named after her. 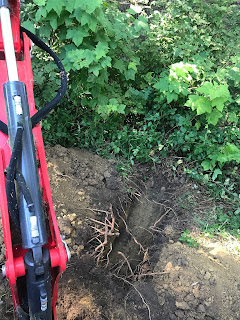 Yesterday, I climbed onto the tractor and learned to use the back hoe.  There's something cathartic about digging a grave.  It gave me an outlet for my grief while creating the place for Winston.
I know even my husband got kinda misty while we dug. 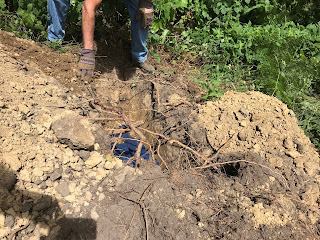 This afternoon I wrapped Winston in one of Momma's soft blankets and together my husband and I carried him up the hill.  Despite his recent illness and weight loss, I couldn't believe how heavy his body still felt.  Even in death, he was still my big brute. 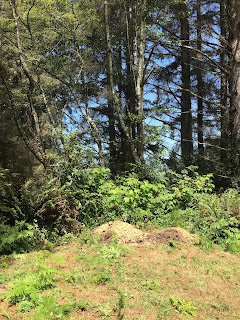 We set two log stumps on top after flattening out the dirt.  My husband is going to take one of the planed boards he has and is going to make a bench.  I'm going to make a marker with a cross with Winston Churchill's name on it.  We joked about using some of the cat food cans that he loved and making a sculpture or art piece of some kind.  We'll see what I end up doing, but
I love that it can be a place for rest and quiet reflection. 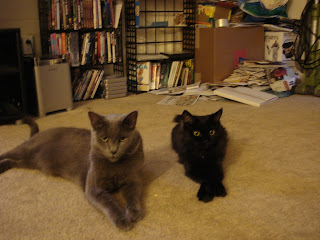 Winston has crossed that Rainbow Bridge where
I'm sure he was met by Lacey who died last year.
I can only hope
I gave him a good kitty life.

You'll meet Winston beyond the Bridge when the time comes, Veronica. You looked after him, and rescued him from that tight spot in the semi wheel, and he has given you 16 years of love and fun.

I think you gave him a great life! It is always so hard to lose a loved pet as they became so much part of our family! I admire your tenacity to try to find him at that rest stop!! He was a great cat that I know you will always remember and hopefully with fond memories after the initial raw grief leaves you. Been a tough year for you and losses. Lets hope this is the last one.