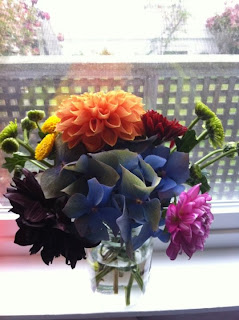 I've spent the last 13 years living in the Midwest and East Coast, and to be honest, I've never much looked forward to spring.  I can remember that very first fall in Wisconsin;  breathing in the wonder of it all.  Seasons.  You don't get those much in Southern California.  There's dry and there's wet.  That's about it.

But, in Wisconsin it went from a warm summer to a crisp fall.  I started headily anticipating winter... my first snowfall.  Then it came.  I ran around taking pictures of the light dusting.  It all disappeared by the next morning, but for me, it was all so amazing.  Of course, driving in it became another issue, and by February I was really looking forward to seeing some sunshine.  That's when it started raining and the white piles of snow became brown piles of mush and mud.  Then it would freeze, then it would snow, then it would thaw, then it would rain and the cycle would repeat.

Then one day... somewhere around late April the landscape suddenly went from brown to green, then the heat and humidity of summer fired up.  Seriously, when was fall coming back?  Wash, rinse, repeat.  Given the choice, I preferred fall and winter.  None of this yucky brown-white mess for me.

This year, we're on the West Coast.  Can't really say there's seasons, but what I can deduce so far is that for the first time in many years, I am looking forward to spring.  We moved here at the beginning of fall, and all of the hills were changing to a golden brown.  The trees had mostly lost their leaves.  Now, there's lambs appearing in the fields.  The rain seems to be slowing down.  The days are getting longer.  There always seem to be calves around, but I think the hillsides show a sign of promise of green waving grasses and a covering of foliage.  I can see the bulb plants pushing their way up toward the sky.  I see hope all around me.
at January 26, 2011

A wonderful entry Veronica. I can sense the hope of Spring threaded throughout your prose.
Roll on Spring for me too!
Jeanie xx

I've always lived where there are very definite seasons, and I am glad about that. But oh, I am so very tired of winter this year! lol I'll be so glad when spring gets here.

We have a few more months before I will see the hope of spring in Iowa but I am really looking forward to it this year. I also love the fall.